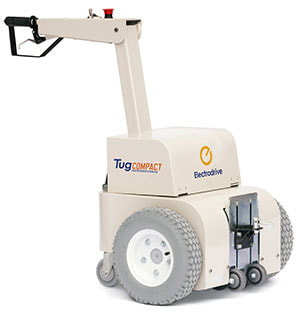 Ergonomic electric tug
The Tug Compact pedestrian operated electric tug is a nimble powered tug that allows a user to tow up to 500 kg safely. It is the ideal tug for towing document, stock, linen, medical trolleys or meal trolleys in and around tight spaces with ease.
With the forward facing tow action of a tug, the user is always protected against collisions and costly push/pull injuries. 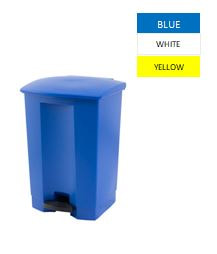 Battery powered tug with a 1 or 2 tonne tow capacity 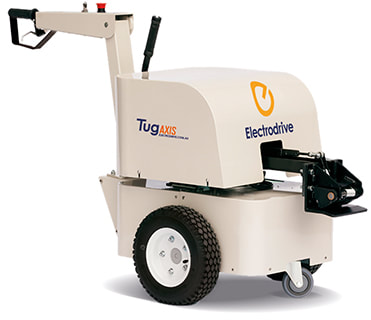 Australian-made electric tug
Electrodrive's powerful battery operated Tug Axis is available in one (1T) or two tonne (2T) towing capacities. Supplied with an auto-latching hitch for easy attachment to trolleys, it is ideal for industrial towing, as well as transporting medical carts around hospitals, moving heavy specialist equipment or moving heavy trolleys around factories or retail. 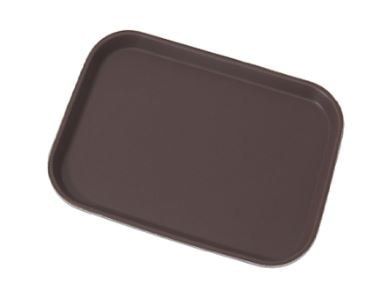 Battery powered tug with a 4 or 5 tonne tow capacity 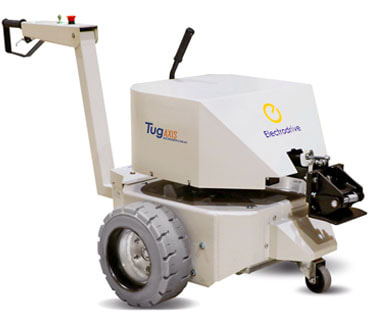 Australian-made ergonomic electric tug
The Tug Axis pedestrian operated electric tug is another powerful workhorse in the Electrodrive powered tug range. Available in 4 and 5 tonne models, the Tug Axis is designed to improve safety and efficiency, while reducing the risk of accidents that can occur when manually moving very heavy loads.
Ergonomically designed, the powered Tug Axis positions the user in front-of-the-load. The tiller control provides a natural walking posture, reducing the risk of strain or injury. With maximum forward vision the risk of collisions with pedestrians or objects is minimized.
Battery operated and rechargeable, the Tug Axis features an ergonomic foldable tiller handle for ease of use, three speed controls with forward and reverse, and emergency stop and 'back-off' buttons for maximum safety.
It is supplied with a lock-tow hitch for easy hitching to trolleys and loads. 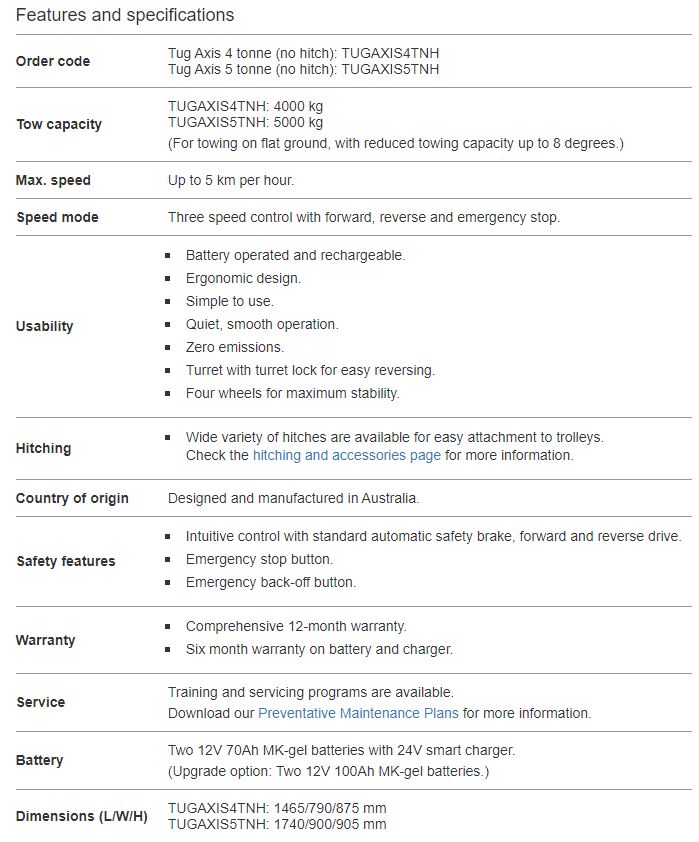 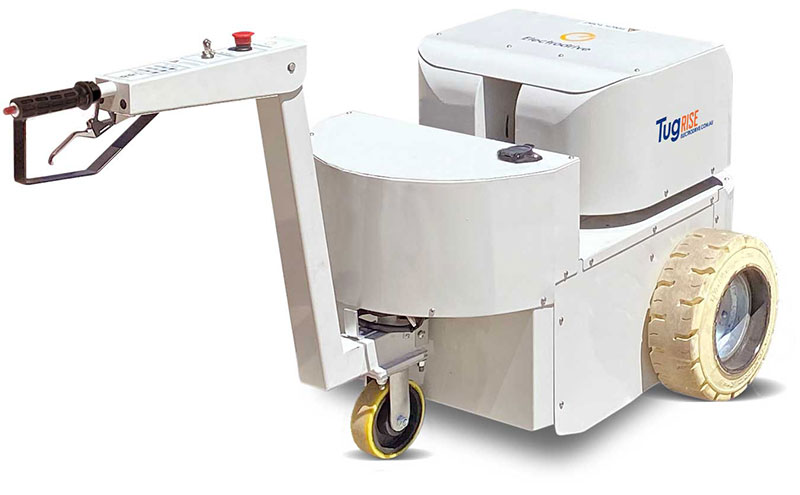 Tow heavy bins up ramps using the Tug Rise
The all new Tug Rise battery operated electric tug has been specially designed to tow on steep slopes or ramps of 15 degrees.
Safely tow up to 1,000 kg up driveway ramps (on a 15 degree ramp or incline) or tow up to 5,000 kg on a flat surface. (Unlike the Tug Axis and Tug Tough which are rated for 6 degree ramps, the Tug Rise is rated for extreme driveway ramps of up to 15 degrees.)
Suitable for moving 660 litre and 1100 litre bins up and down ramps, universal towing devices are also available for 660 and 1100 litre bins. We can also supply directional lock mechanisms for swivel castors to help control the steering of your bins.
As with all the electric tugs in our range, the Tug Rise is designed to improve safety and efficiency, while reducing the risk of accidents that can occur when manually moving very heavy loads. 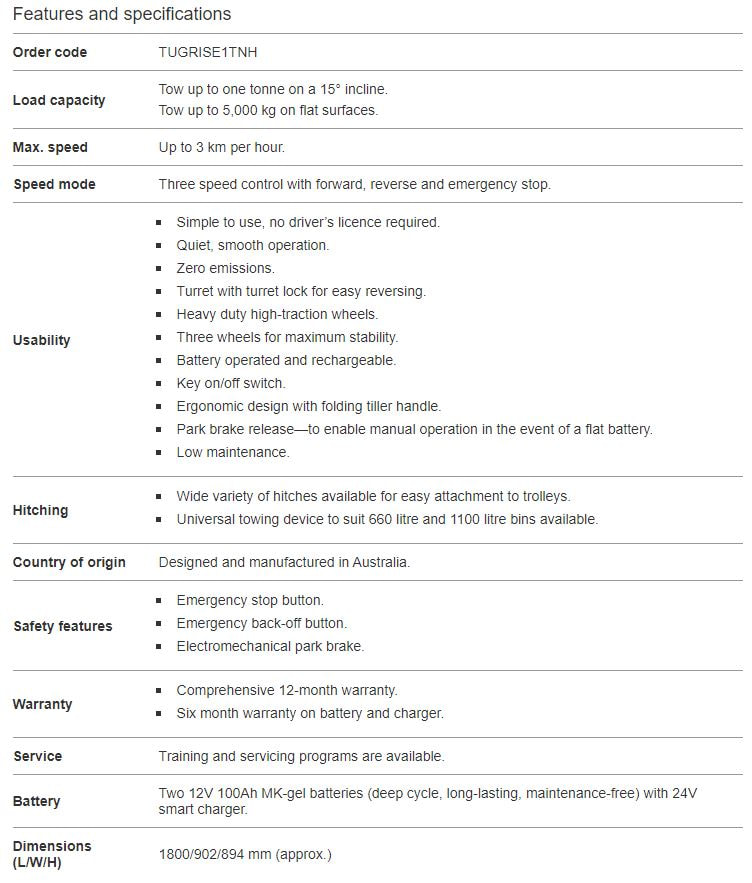 Heavy duty electric tug for towing up to 10 tonnes
Our Tug Tough pedestrian operated electric tugs are the perfect heavy duty workhorse for loads up to 10 tonnes.
The Tug Tough utilises a powerful 48 V drive system to allow a single operator to hitch to and move big loads. The Tug Tough can be fitted with an optional hydraulic lifting hitch available for either capacity.
Just like the other tugs in the family, the Tug Tough allows the operator to walk in front of the heavy load, allowing maximum forward vision and eliminating the possibility of accidents when negotiating turns. The Tug Tough converts a difficult and often dangerous operation into an easy to move motorised assembly.
The Tug Tough incorporates all of the features you would expect on an Electrodrive product and is designed to improve safety and efficiency, whilst reducing the risk of accidents that can occur when manually moving extremely heavy loads. 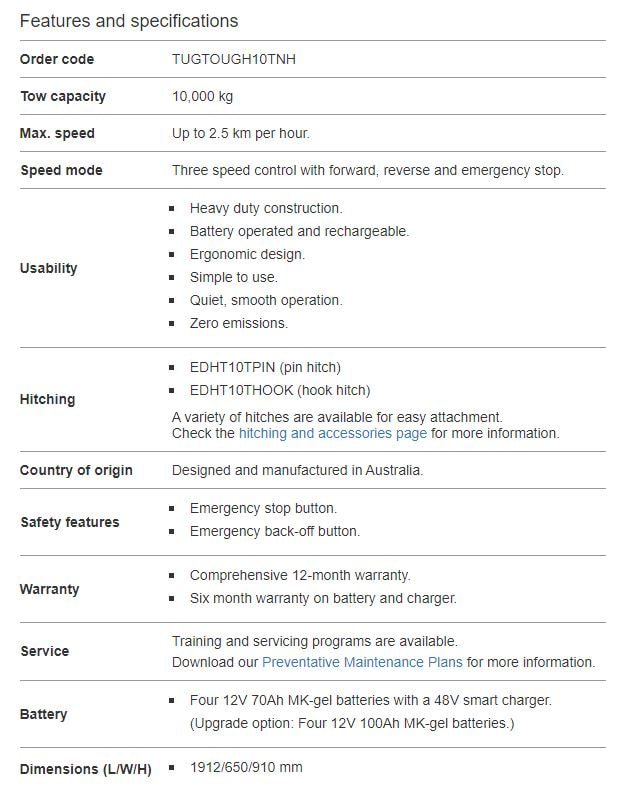